Overview for visiting the archaeological sites in Athens such as the Ancient Agora, the Temple of Olympian Zeus and Kerameikos.

Archaeological sites in Athens are full of history. Today, not everything is intact, but you can still visit and view parts of these locations. The most famous area is of course the Acropolis. In this article you can read about the 6 other archaeological sites that you can visit in Athens with the special combi ticket: 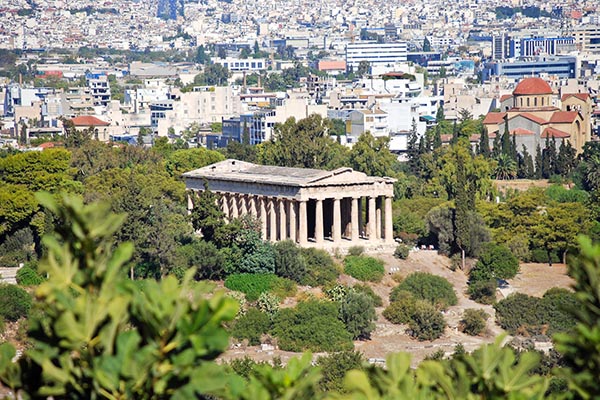 The Ancient Agora with the Temple of Hephaistos

The Temple of Hephaistos, highlight of the Agora in Athens

The Temple of Hephaistos is one of the oldest buildings on the Ancient Agora that has remained almost intact. The building has remained in good condition as it was used as a church for a while. That is why there are graves and tombstones. This building is completely surrounded by Doric columns. Inside is a sacred space where statues of gods used to be. The whole building is made of marble. On the outside metopes are the nine labors of Herakles and eight labors of Theseus. On the inside of the building there is a frieze depicting a battle between Theseus and a son of Pallas.

At the Ancient Agora you will also find the Stoa of Attalus. It was built by order of King Attalus II. This king had the stoa built as a thank you to the city of Athens for providing him with an education. A stoa is an elongated building with a colonnade on both sides. The back and sides are covered and the front is open. Stoas were mainly built in places such as agoras to provide shelter for people when it was very hot or when it rained. Today the Agora Museum can be found in the Stoa of Attalus. 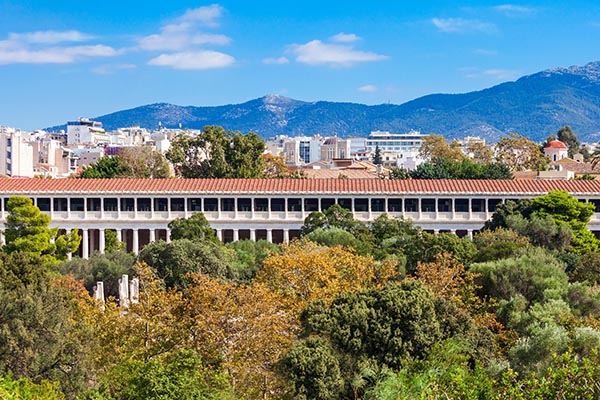 The Stoa of Attalus of the Ancient Agora

The Agora Museum is now located in the complex

The Roman agora was surrounded by a wall and contained a square with stoas and several shops and trading places. The agora had two gates. To the west was the gate of Athena Archegetis. To the east was the Propylos. Just outside this gate is the Tower of the Winds. This tower indicated the time and the wind direction in ancient Athens. The tower was pointed exactly to the north, so people could read the time through the shadows on the building. There was also a large water clock inside the tower. The building consists of eight sides and one of the gods of the wind is depicted on each side. These gods are depicted in the direction of the wind they represent.

The Roman Agora of Athens

The adjacent Tower of the Winds

Hadrian's Library is located north of the Roman Agora. This complex of buildings was built around 131. The building is named after Emperor Hadrian who also commissioned the construction of the library. Despite the name of this building, it was much more than just a library. There were several buildings that all had a different function. The complex was walled and consisted of several rooms and colonnades. Various works of art and paintings were displayed in the colonnades. To the west was the entrance gate of the complex. To the east were the library spaces. Books and papers were kept here and these spaces were also used for reading. Lessons were also given in other rooms. In the center of the complex were gardens and ponds.

In 267 the library was damaged during a raid. The building has never been fully restored. Over the years, several buildings have been added to the space around the library. About 50 years ago, the western wall near the library was restored and plans were made to rebuild the rest of the complex. 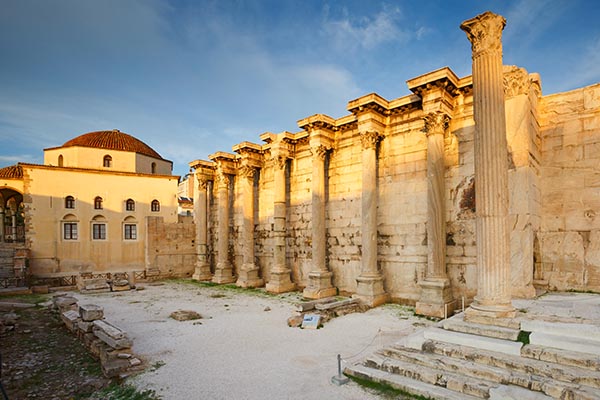 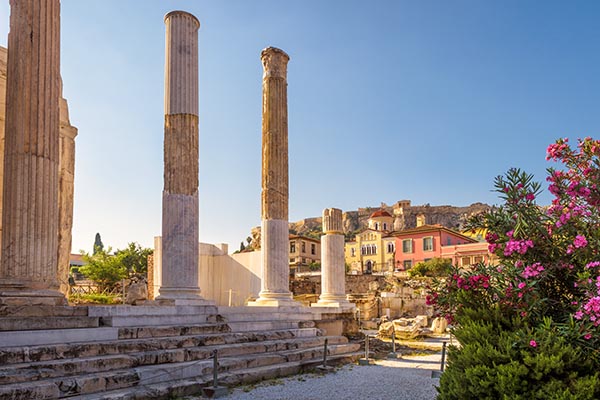 The Olympieion was the largest temple in Athens. It was dedicated to the god Zeus and is therefore also called the Temple of Olympian Zeus. This temple can be found in the south of Athens. Various gods have long been worshiped on the site of this temple. Construction of this temple began in 515 BC, but it was not completed until AD 125 by order of Emperor Hadrian.

The temple was built on square stones and had 104 columns of 17 meters hight. Today, there are only 16 columns left that you can visit. Close to this temple you will also find the National Gardens of Athens. You can also visit the Zappeion in these gardens. The Zappeion is a building specially made for the Olympic Games. During the Olympics in 1896 it was used as a fencing hall. Ten years later, the building served as the Olympic Village. It was one of the first buildings specifically designed for the modern Olympic Games.

You can also combine the visit to the Olympieion with a visit to Hadrian's Gate, which is located nearby. This gate used to be the entrance from ancient Athens to the new Athens. Hadrian had this gate built to indicate the difference between the districts. There are also inscriptions in Greek on both sides indicating which side of the city you are on. Furthermore, both sides of the gate are almost identical. 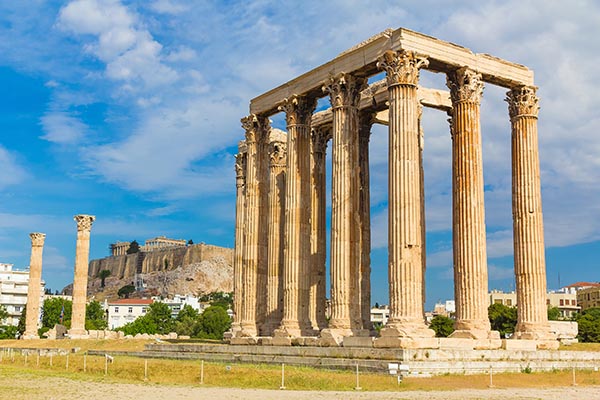 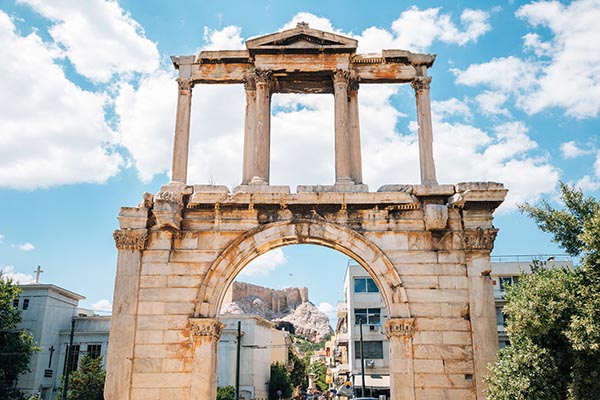 Kerameikos is a neighborhood in Athens. This district used to be an important area for potters. There was a stream with water present and the location was well cordoned off. The district is therefore named after the son of Dionysus and Ariadne: Keramos. He was the patron god of potters. The word ‘ceramic’ originally comes from here.

During the Persian War the wall of Themistocles was built dividing the district in two. A cemetery arose outside the walls of the district. This was for a long time the largest cemetery in all of Athens. Around 86 BC there was a lot of looting at the cemetery. The cemetery was no longer used after that and has been slowly buried under the silt of the stream.

Excavations have started in this area since 1870. You can also visit the excavation area and the old cemetery. Here you can see, among other things, various funerary monuments. The excavations that come from this area are exhibited in the small Kerameikos museum. Here you can view statues, vases and reliefs that have been excavated. 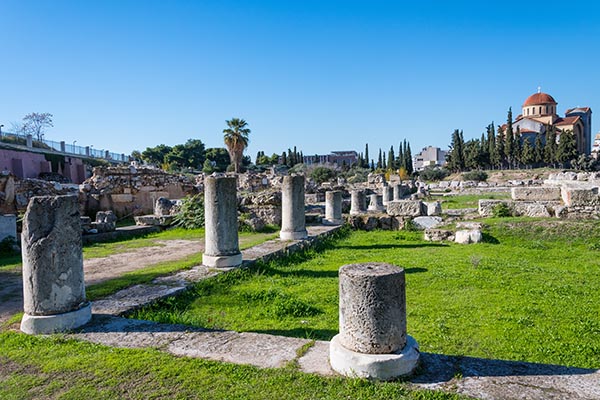 The Archaeological Area of Kerameikos 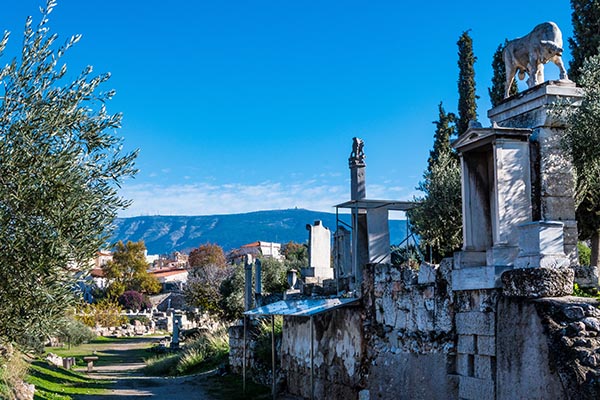 Kerameikos, the old cemetery of Athens

Aristotle's Lyceum or Lykeion was a lyceum that lies outside the walls of ancient Athens. It is one of three well-known lycea, next to Akademeia and Cynosarges. The Lykeion contained many spaces that had different functions. There were gyms, racecourses, walkways and arcades. The lyceum was used as a place to exercise. Exercises and training for soldiers were also held.

Later, many philosophers also came to discuss and teach. For example, it was a place where Socrates frequented. The philosopher Aristotle founded the Peripatetic school here. Here he gave lessons on his philosophy. Remains of the Lykeion were only found in the 1990s during archaeological excavations. For example, remains of various buildings and colonnades were found. There are no plans to restore it. They will be preserved and the excavation area will become an archaeological park. Of all the archaeological areas described in this article, this is the least interesting area to visit. 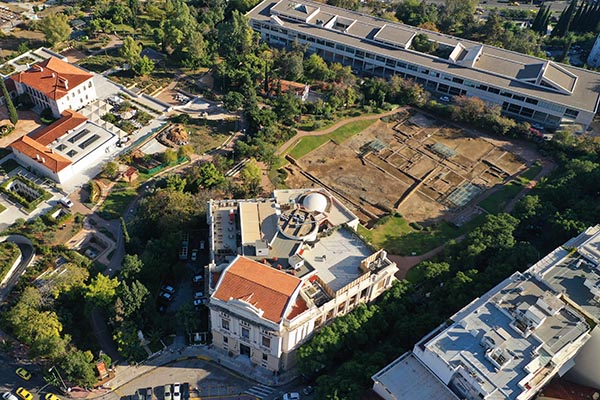 Aristotle's Lyceum from the sky 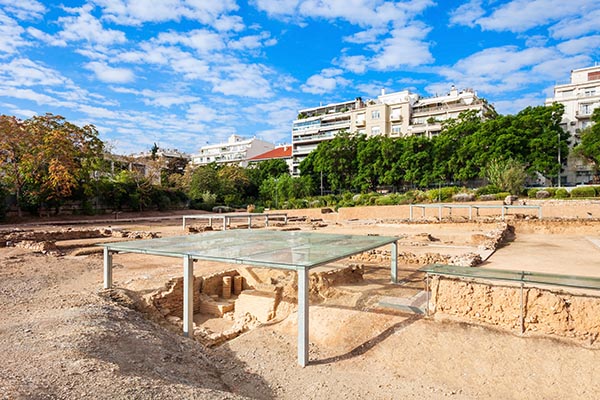 Excavations of the Lyceum of Aristotle

Where are the archaeological sites? 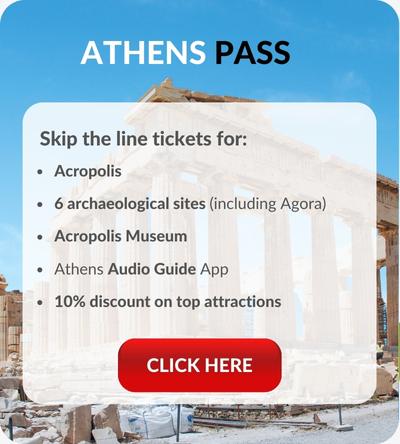